"Something Wrong With Her" virtual book tour

Welcome to the second stop on Cris Mazza's blog tour for her newest book, Something Wrong With Her. Yesterday, Lori over at the TNBBC blog offered an audio clip of Cris reading her own words in her own voice; today, I bring you a review of Cris's groundbreaking real-time memoir. Cris is the author of more than 17 books, including Various Men Who Knew Us as Girls, Waterbaby, Trickle-Down Timeline, and Is It Sexual Harassment Yet? Her first novel, How to Leave a Country, won the PEN/Nelson Algren Award for book-length fiction. Mazza has co-edited three anthologies, including Men Undressed: Women Writers on the Male Sexual Experience. In addition to fiction, Mazza has authored a collection of personal essays, Indigenous: Growing Up Californian. Currently living 50 miles west of Chicago, she is a professor in the Program for Writers at the University of Illinois at Chicago. 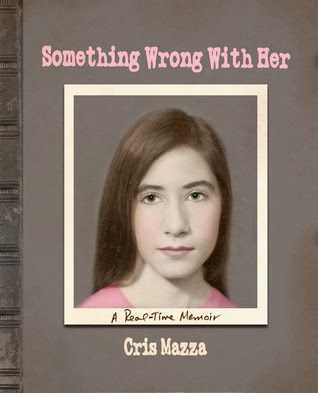 Somewhere in the nebulous ether between a memoir and a duet performed by two banged-up soulmates across decades and flurries of letters lies Cris Mazza's Something Wrong With Her, a real-time introspective retrospective of the author's turbulent sexual and romantic past that chronicles the damages incurred along the way.

Something Wrong With Her is an appropriately messy meditation on how the past is never really gone and how the present has no meaning without the foundation of previous experience giving it support and contextual relevance. While Mazza focuses most intently on both her post-secondary-education and adult selves, the fact that the younger version of her was never sexualized in a healthy way is among the many refrains to which she returns, both as a pure concept and as a variation on the theme that has cast its predatory pall over too many aspects of her life. She explores how she never felt that unabashed sex drive that held so many of her teenage peers in hormonal thrall, how the very idea of boys wanting the whole of her--especially the "dirty" parts of her body she could barely acknowledge as hers--never even dawned on her as a possibility, how being her male friends' neutral zone of safe experimentation before doing the deeds with their girlfriends left her with a sense of always being the stand-in for prettier and more desirable girls, how rape games and harassment comprise the bulk of her earliest sexual experiences, and how all these and so many more stomach-churning thoughts and milestones have all compounded to leave Mazza with a sense that there is, indeed, something wrong with her.

Please understand that “messy" carries not a hint of criticism here: There are an awful lot of crucial but incongruent pieces jammed together so that some of their seams are showing, but it adds an authenticity to Mazza's journey of self-discovery, showing just how long and how hard she has been fighting the false starts and full stops that added to the interior hurdles she faced while making peace with and learning about herself. Reading Something Wrong With Her is like watching Mazza revisit diary entries, letters, doodles, photographs, factual life experiences reimagined as the fictionalized components of previously published works, and dusty personal relics to create both a life-sized puzzle of her development and a roadmap of the paths she took to arrive at the state she's in now. As Mazza compares the patterns of her past and examines their long-range influence on her present, delving deeper into Something Wrong With Her becomes less like reading and more like cheering on a long-suffering soul as she finally breaks through all the negative perceptions she held of herself and her sexuality in a therapy session that's chock-full of AHA! moments.

The writer and musician personae that are roiling within Mazza (the former being the dominant force of her current identity, the latter but a vestigial flicker of the crucial role it played in her earlier years) provide an unexpectedly harmonic call-and-answer element in these pages: Mazza employs music as a metaphor for life, proving that improvisation requires a better ear and more complete sense of the bigger piece than the untrained ear realizes by letting her story carry its narrative in the direction it naturally flows as old memories resurface and new voices chime in with their own unplanned contributions. Old mentors, old friends, old lovers and old nemeses come and go, introducing and underscoring their myriad influences and impacts, each being reexamined as the same pieces of old exchanges are called back to the stage for further scrutiny. Far from being repetitive, they add a poignant recurring theme to a story that is so familiar to its writer but to which she is still a servant, helpless to resist the unplanned direction writing tends to lead its master's hand. While the events Mazza discusses and revisits are all in the past, her reclamation of her sexuality and her self-understanding are still works in progress, leaving some questions unanswered, some elements unexplored  and some threads untied. Unlike a memoir that covers a definitive, complete period of its writer's life, Mazza's memoir in real time addresses what it is to be her as a writer, a woman, a still-developing individual and maybe, just maybe, a secure romantic partner as she continues to forge ahead on those previously uncharted paths.

Much of Mazza's odyssey sings of the things familiar to any woman who was once (or perhaps still is) an awkward, insecure girl on the cusp of womanhood with no clue as to how her peers seem to be making the adjustment with minor mishaps (as opposed to paralyzing confusion and a sense of being either passed over or a consolation prize) and in full possession of themselves. Her self-pummeling mantras of "I should enjoy this" in the face of teenage and college boys' clumsy advances and hormone-soaked attempts to fumble their way into her pants betray an inability to see herself as a physically adept or desirable entity of femininity, how her own gender roles and expectations are awash in shameful discomfort reinforced and exacerbated by a parade of ruinous men and boys alike. She marvels at more sexually adventurous and confident girls who navigate the murky depths of sexual awakening as if they belonged to a different species entirely, free of the crippling fixations Mazza finds herself haunted by.

While much of the story pertains to how Mazza grapples to reconcile her physically adverse reactions to sex--namely the pain of a weak pelvic floor compounded by anorgasmia, the inability to experience an orgasm--with her psychological aversion to it, the beating heart of this book, for me, was the lifelong (though far from smoothly unfolding) friendship between Mazza and Mark. It's impossible to exist in such a void that outside factors hold no sway over the development of an individual, and those external forces can serve as some of the most objective vantage points to witness the progression of a personality: Mazza relies heavily upon Mark's input, drawing directly from their volumes of interactions and allowing their emailed exchanges to speak of a love that has patiently waited decades to be revealed. The progression of their relationship, from stumbling teenagers to adults whose hindsight is awash in the wisdom of experience and uncertainty of facing long-ago mistakes neither realized they were making, is a heartening affirmation that finding the absolutely right person at the absolute worst time is not always a tragic sentence of irreparable proportions. The love (both easily platonic and desperately romantic) and dawning awareness that transpire between the two are the book's best evidence in proving Mazza wrong for thinking herself frigid.

With the easy payoff that comes with writing about sex making the erotica that was once taboo a wildly popular genre these days, a story about its deliberate absence is a welcome change, and Mazza’s honesty and willingness to put her own hang-ups and mistakes under the microscope of public examination exemplifies the equally matched interplay between bravery and vulnerability that is the hallmark of a compelling memoir.
Posted by Madeleine at 5:40 AM