(This review was originally written for and posted at the Chicago Center for Literature and Photography's site. I paid for this book with my own hard-won dollars.) 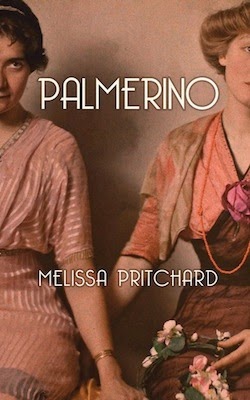 Of all the successes contained within Palmerino's deceptively slim form, chief among them is its sound example of why Melissa Pritchard should be everyone's factually based but fictionally rendered introduction to coarse, easily misunderstood and half-forgotten writers. WIth a sensitive touch, lush descriptions and a richly evocative narrative triptych, Pritchard's exhaustive research into Violet Paget--perhaps better known as her nome de plume and masculine alter ego, Vernon Lee, the grandiloquent feminist and penner of supernatural tales, aesthetic studies and travel essays--flawlessly blends the late-nineteenth century writer's life with that of her fictional modern-day biographer.

Sylvia Casey, also a writer who has fallen on hard times (namely her marriage's demise as signaled by her husband absconding with another man, not to mention the faltering critical and commercial reception of her two most recent books placing her career in precarious uncertainty), has retreated to Palmerino, an Italian villa not far from Florence where Violet had spent much of her life, to slip away and throw herself into writing a novel inspired by Violet's life. Through research and walking the same grounds Violet once did, Sylvia immerses herself in the life of her spirited muse, mostly unaware that her subject has become her possessor in an unintended bit of method biographing.

The triumvirate of narration is an effective collision of past and present: Sylvia's quest to alternately lose herself in and hide from Italian life as she learns about the tempestuous Violet and writes of her discoveries; snapshots of Violet's life ranging from girlhood to brief mentions of her parents' and beloved Clementina's deaths; and ethereal interjections from Violet herself, as not even death could silence such an indomitable spirit, watching (and becoming gradually besotted with) her biographer, guiding the still-corporeal writer to clarify the truths about a life that has grown tarnished by assumptions: Violet is not a figure to be pigeonholed into easy descriptions, and she is irritated by history's posthumous efforts to reduce her to flat absolutes.

Though Violet is the linchpin holding the trio of perspectives together, the commingling of biographer and subject is present in each section to increasing degrees as Violet breathes her own essence into Sylvia by gradual possession. Sylvia's own writings are the most obvious interplay between the two, with Violet's resurrection flowing from her fingers onto pages both typed and intimately scribbled. Violet herself has been observing her biographer since the latter's arrival, a benign watchfulness yielding to a ghostly seduction that becomes ever more apparent in the chapters that follow Sylvia's pursuits. As the present-day writer encounters relics and writings from Violet's life, Sylvia withdraws more into herself and her work, at first wondering almost wryly if Violet is guiding her and eventually shirking her own rigid writing methods to scrawl pages in a hand nearly as illegible as Violet's, certain that a female presence draws ever closer until "hearing her name, she understands who is calling her" and finally flees to Violet's secret garden in the book's final pages.

It is Pritchard's sympathetic but honest rendering of a woman some found tyrannical, some found charming and almost all found terrifyingly learned that urge her ghostly heroine into genial illumination. By preserving Violet's intellectual intensity as well as capturing the softness of her romantic pursuits, the hard-edged scribe becomes a fully realized figure rather than the wanly uneven caricature such a divisive female figure can so easily be written off as. It is this careful balance that lends so much female empowerment to the novel, as Violet publicly shuns all the social niceties that she believes exist "principally to defang" a woman but extends the compassionate sensitivity stereotypically attributed to the so-called fairer to those she feels most deserving of her affections, selectively embracing her femininity when she finds it necessary. It is easy to reduce a strong woman from a repressed era to the limited and scandalously taboo "lesbian" label but Violet was volumes more than her attraction to other women. She recognized the disadvantages of her gender the moment she was pitted for her ugliness and turned an unfair liability into an asset, which led her to adopt the mannerisms, dress and persona of a man, denying the world a chance to thwart her ascent, both as an intellectual and a human being, by seizing an opportunity to turn biology's lousy hand into something she could take control of and claim as her own.

If Violet's off-putting bravado and ferocity are pleasingly mitigated by inclusion of both her past and her first-person chapters, then her actions are justified by the more submissive Sylvia, who can't catch a break and shrinks from people in direct opposition to the way Violet sought to dominate them. Sylvia has merely inherited the equality for which her female predecessors have won and quietly moves through life, never questioning the path she has chosen until she begins to wonder what would have happened if she ever sought the pleasure of another woman's company, while Violet has struggled to assert herself in a male-dominated world, wrestling her way into commanding respect where she could get it and striking fear where she could not. The opposing trajectories of their writing lives--Sylvia chronicling the rise of Violet's career while her own is in rapid decline--and the sense of novelty with which each regards her near-perfect foil is a subtle affirmation that expression of one's sexuality can be a thing constricted by the absence of that perfect half, lying in wait for its cue to finally rise from dormancy.

The achingly gorgeous prose in which Palmerino is written strikes pitch-perfect harmony with its equally strong expression of humanity, promising that the hidden beauty within is always worth the time it takes to discover it.
Posted by Madeleine at 10:14 AM