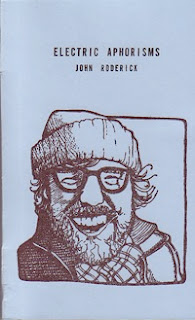 
One of the few reasons I bother (albeit rarely) with Twitter is that John Roderick, the sasquatchian mastermind behind one of my all-time favorite bands, has an account there. I can read his 140-characters-or-fewer bursts of dry wit for free, aye, but he can't very well autograph my computer screen when I see him next month, can he? (Though the internet doesn't get ink from its cover all over my hands and its pages dont't start falling out halfway through the reading experience, so score one for gadgets.) To appease the unbridled fangirl in me, I ordered this book, which arrived the same day as the tickets to John's January solo show. Is that the hand of Fate scrawling out a message for me? Of course. Duh. What, the universe doesn't rearrange itself for you?

I gleaned some crucial information from this collection of amusing assertions. Like me, John talks to machines in the hopes that the human behind the curtain hears him. He, like me, has a soft spot for songs in 3/4 time. He clearly enjoys dropping allusions to Idiocracy, "Kashmir," Janis Joplin tunes, MST3K and Gabo, much like I do. He scoffs at folks who make responsible life choices, uses "sarcasm to soften [his] fury and use[s] over-formal politeness to soften [his] sarcasm," looks for grammatical errors everywhere, knows that Sarah Palin is evil, appreciates aging technologies, hovers somewhere left of center (unless the punchline calls for an exaggeration of political ideals), feels like his nature alienates him from modern society, likes watching fat animals be fatties, stays inside for days, and facetiously revels in his complete lack of interest in other people (including his future self), all of which sound just like me.

All of this leads me to believe that JoRod and I should be the bestest of buddies, complete with those plastic heart necklaces everyone rocked like they was pimpin' in the early '90s. I'm sure he'd appreciate my hilariously ironic fake-racisim just as much as I'm tickled by his -- even if I can't play guitar like a middle-aged prodigy or cover 80% of my face with a beard that would make everyone in ZZ Top drip with envy.

I'm also now armed with the knowledge that Mr. Roderick, like my darling husband, is a left-wing gun nut who embodies many bearlike qualities, which will be quite useful in convincing my beloved that I'm not really dragging him to a show he's guaranteed to be lukewarm about.
Posted by Madeleine at 5:05 AM No comments: 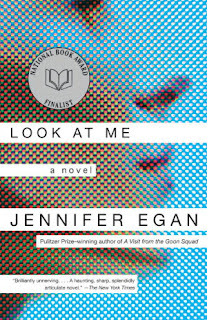 
I am surprised by how much I enjoyed this book.

Reading during one of those godawful endurance tests when works spills well beyond the professional boundaries I've established long ago to keep my job's ruinous hands off the things that make life enjoyable almost always spells disaster for whatever unfortunate book is the victim of bad timing (and often absolutely no free time at all), as late nights and occupational frustration leave little brainpower and less desire to read things I'm not paid to attack with a red pen.

Furthermore, this book smelled of what I suspected to be, despite Jennifer Egan's decidedly admirable reputation, the much-maligned chick lit, a genre in which I have little interest and with which I have virtually no experience. A former model meets with a fiery car accident, with the resulting surgery transforming her into a still-beautiful but unrecognizable creature? A teenage girl is staring down the very experience that will finally propel her from childhood's idyllic innocence into the harsh realities of introductory adulthood? The onetime high-school football star who has embraced his natural place on the fringes of academia? A charmingly damaged private detective? The perennial exotic, mysterious stranger? I was prepared for the marathon eye-rolling sure to follow along with whatever parade of self-fulfilling fantasies was poised to shuffle across more than 400 pages of predictability and pageantry.

And then the book began with a quote from Ulysses, which threw me off entirely (spoiler alert: yeah, pretty sure it's not chick lit). And these characters almost immediately emerged as richly imagined, intricately complex and cautiously likable personalities illustrating a panoply of well-executed themes and generously supported messages that, as demonstrated by this cast embodying a dizzying range of temperaments and impulses, prove the commonality of the human condition, right on down to how closely we guard the private motivations that, were we to give voice to them, would draw us closer to one another in an understanding of recognition. This book, it turns out, has things to say. That are worth saying. And are said well.

It is often the case with nonexistent reading time, which means long lags between putting a book down and picking it up again, that I lose both details and interest that would otherwise be present in a more ideal reading pace, ultimately casting an unearned fog of forgetful disinterest over a story that sputteringly emerges in fits and irregular bursts. While this book is rather chock-full of tiny details that merge to form multidimensional characters at oddly familiar crossroads that result in even more recognizable moments of clarity, they're so well connected that it was difficult to lose track of who did what, what happened to whom, and how some subtle detail presented pages and weeks ago had propelled the story along its only logical trajectory. What's more, each long-overdue return to this book felt less like a desperate flurry of forced refamiliarization and more like being welcomed by patient acquaintances who knew exactly where we left off and resumed their narrative threads without either the confusion or faltering steps of gap-marked memory that so often happen when a book can start to feel abandoned.

There are times when characters seem to exist merely as vehicles for the plot, and there are times when plot exists simply to give the characters a reason to be written: This is the perfect middle ground between such off-putting extremes. Each of the main characters (and most of the supporting ones) continue to be fleshed out as the novel forges ahead, and each of their stories gradually interlock or refasten after being pulled apart long ago or make their way to a crescendo of connection. The parallels of growth and discovery in both the players and their plays create a not unpleasant sense of being overwhelmed by the places life takes us and the ups and downs of getting there, serving as a keen reminder that the destination is not a full stop but rather a shift in existence that needs to be taken into account and calls for an adjustment if it is to be allowed the awesome force of realization it is intended to be. Personal evolution doesn't just happen: It is the correct response to those predetermined moments that can either bring the needed change to thrive or swallow a person whole because they'd rather stand in place than take a chance on self-discovery.

It's not like change is easy, especially when it's a necessity of circumstance rather than a luxury of choice. Like bucking up and moving on from a tragedy, be it a self-contained one demanding physical recovery or the universally understood ache of young love (or soul-baring infatuation, as it so often truly is) that flees just as quickly as it descends, leaving behind a newly guarded heart sore with the implicit realization that things will never be the same again. The changes this novel's characters undergo highlight the ongoing battle of minimizing the divide between the Old Self and New Self, how every newly shed identity must find its place among all the outdated incarnations of the self to comprise a single ghost, how difficult it can be to honor the past without living in it so as not to stunt the growth of the present, and eventually future, self. The present is destined to join the composite of the past, which exists alongside every new self, and it is a thing we can never truly shed or hide because it is apparent in the memories that shape our resolute cores of being, regardless of whether we choose to embrace or deny the selves that were.

Most of all, as suggested by such an imploringly imperative title, this is a book about recognition. Whether a character's metamorphosis is sudden, violent, inevitable, an acceptance of maturity or a refusal to exist within the confines of one identity for too long, validation through another's affirmation is the only real measurement of a transformation's success. We can always recognize ourselves, even though we are the only ones aware of our most infinitesimal changes: It is through others that we see where and how well we fit, if at all, into the cogs of greater existence.
Posted by Madeleine at 4:21 AM No comments: