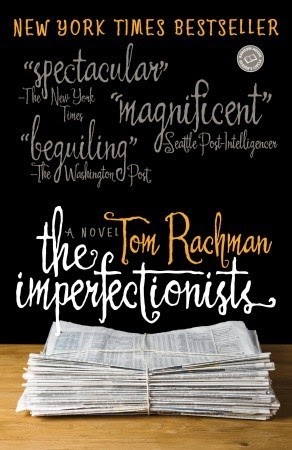 Once upon an occupationally happier time, I was an award-winning journalist. The "award-winning" part wasn’t all that important (though obviously not some unwelcome kudos) because I have loved print journalism in ways one should never love an inanimate intangible ever since the gateway drug that was my mediocre private university's labor-of-love, student-run newspaper showed me what I was meant to do with my life, a certainty that was cemented by the soaring pride I felt when our Little Paper That Could beat the piss out of Princeton's college paper in the New Jersey Press Awards the year I was opinion editor.

When I graduated as a bright-eyed, enthusiastic young drunk, the only tears I shed during the ceremonial severance from the first place that ever felt like home were over saying goodbye to the paper that had directed me to my future path (and, for bonus sentimentalization, introduced me to my husband). At the time, I had no idea that I would spend the rest of my professional career desperately seeking the same sense of personal pride and professional satisfaction that has, so far, been exclusive to my days as a collegiate journalist.

I am grateful that I got to spend a little more than three years in newspapers; unfortunately, my dream job exists in an industry that has been manhandled literally to death since the rise of the internet. My last paper was under the control of a company whose corporate-bigwigs’ salaries reached numbers that I still can't believe actually exist and whose stock is doing well enough to reliably earn a spot in certain mutual funds' top-ten holdings. So, naturally, the newsrooms themselves -- the places where the actual product is miraculously birthed seven days a week as the few remaining editors and reporters and behind-the-scenes staff pick up yet another unceremoniously laid-off comrade's smorgasbord of responsibility -- face cut after cut, furlough after furlough, bloodbath layoff after bloodbath layoff and are still expected to perform as they did in the golden days of print journalism.

When I bid adieu to the newspapering life, I was disillusioned and demoralized. What began as the personal satisfaction of working in the very world I set out to immerse myself in ended with overworked anguish as I found myself moving farther from the very things that drew me to journalism in the first place. It had been ages since I last wrote an article or attended a meeting or snapped a photo or did any of the things that made me love coming home with newspaper ink under my fingernails. That, combined with hearing the industry's death rattle grow louder with every passing day, was what finally drove me to more stable ground.

For those and myriad other reasons, The Imperfectionists is a hard book for me to approach objectively: With absolutely no regard for reality, my newsroom nostalgia is a thing now steeped in shamelessly over-romantic fondness and colors anything that stirs it in a wistfully rosy hue. There are little things in here that betray the author's keen awareness of universal newsroom truths -- the bitter divide between editorial and corporate; the misunderstood self-righteousness of those tasked with maintaining some modicum of integrity in an industry that doesn't always put such an admirable endeavor above sensationalism and the almighty dollar (also: there are papers that still have corrections editors!?); the self-sacrifice and seeming dehumanization required to ascend in rank while keeping the paper's best interest at heart -- that hit all the notes of a sad song I know too well. The fictional focus of "The Imperfectionists" is the ballad of just one more newspaper on the brink of obsolescence and it is filled with the slow panic that is now endemic to any publication left standing these days.

The very human personalities pouring from these pages are what I imagine would make this a compelling story for those who haven't given their hearts to the cruel mistress of print journalism: This is, ultimately, a workplace tragicomedy that delves into the characters' personal lives, too. In newspapers as in any manically paced work environment, it is all too easy to form alliances that blind one to a compatriot's flaws, just as it's even easier to vilify the ad rep who constantly delays the release of dummy pages, the copy editor who inserts errors into flawless stories, the section editor who demands unreasonable word counts, the reporter who thinks her shit doesn't stink. Disregarding the non-professional side of one's coworkers makes it easier to despise them and launch ongoing battles, as well as serving as a much-needed distraction from the bigger, less controlled ugliness of shrinking ad sales and rapidly declining subscription numbers.

For being a dude-penned tale, the plight of being a lady journalist was explored with a surprising reverence. I wasn't always crazy about the way the female employees were represented here but Kathleen, the paper's executive editor, was a too-spot-on example of what it's like to be a woman playing in the boys' club (which, judging by some of the horror stories I've heard about newsrooms of yore, isn't nearly as bad as it used to be but, good God, some of the old-head editors I've worked with made it clear that it wasn't always my passion and journalistic acumen that got me hired). The lone female copy editor here, Ruby, paints a lonely picture of what it's like to care too much when a deserved pat on the back is swapped for constant animosity and serving as the go-to scapegoat: A woman who lives both alone and for the paper that employs her strikes a more poignant chord of melancholy than a man in the same position, and Ruby is the perfect vehicle for giving such aching sadness a place in the world outside the newspaper's walls.

Placing an English-language paper in Italy and staffing it with uprooted Americans was a nice touch. There is such a divide between Newspaper Life and Real Life that it's a difficult thing to translate for people who don't live for their work like any overly passionate journalist does, and the emphasized chasm of a cultural difference that lives just outside the office walls captures that dichotomy perfectly. There were other little flourishes that made my long-dormant inner journalist perk up with recognition, like how all of the news editor's thoughts are in headlines ("Keys in pocket, sources say") and the way all the non-flashback chapters are told in the present tense.

The closing chapters of this book broke my heart. Just. Destroyed it. It's obvious where the story's going pretty early on but it doesn't mitigate the ending's impact. Kind of like how that one last look at the newspaper office -- the very place that's become a second home after all the twelve-hour days and countless late nights, where you cried over Election Night results because there's no other place in the world you'd rather be when your candidate delivers a victory speech, where you swore in equal measures that you'd never work in this industry again because fuck this bullshit and couldn't imagine feeling this completely at home in any other workplace -- on your last day of being a journalist is always an increasingly close reality but is a terrible mix of freedom and defeat as the familiar building grows smaller and smaller in your rear-view mirror that final time.
Posted by Madeleine at 5:03 AM