And the Dark Sacred Night

(This review was originally written for and posted at the Chicago Center for Literature and Photography's site. The publisher graciously provided me with a copy of this book.) 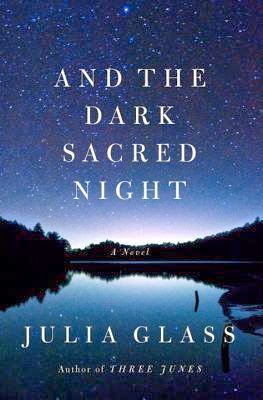 I don't remember many details from Julia Glass's first novel, Three Junes, other than stumbling upon it that summer between high school and college when I only read books with award medallions emblazoned on their covers, finding justification for such a pretentious pursuit in my enjoyment of that novel. That same ease of getting lost in a story packed with likably intriguing personalities came screaming back after a couple dozen pages into Glass's fifth and most recent offering, And the Dark Sacred Night--a novel that, like the Louis Armstrong song from which it borrows a lyric to refurbish into a title, is unconventionally beautiful and just the right amount of earnest.

Glass returns to a handful of events and characters introduced in her debut novel, dipping into its material for a splash of background color in some places and smaller but crucial supporting detail in others, to spin a new yarn about the connectedness of people and the familial ties that alternately bind and throw out that last viable lifeline. Kit, an out-of-work husband and father, is not only in the throes of a mid-life crisis of crippling proportions but also pushing his wife, however unintentionally, to the limits of her patience. The only solution to Kit's inactivity, he and his wife, Sandra, agree, is to finally seek out the identity of and story behind the father he never knew, as Kit's mother, Daphne, has remained doggedly silent about her teenage lover who died in his 30s, more than 20 years removed from the book's present. Kit's efforts reconnect him with his first stepfather, the man who formally adopted Kit as a boy and with whom a teenage Kit lived well after his mother left, who puts him in contact with the paternal family he never knew existed.

Here, the rich backgrounds and layered stories that give each character dimension have also made each character palpable and engaging. These are everyday people with the kind of problems people face every day--making ends meet with dwindling resources, the slowly realized crisis of a faith that was once unshakable, the dawning of an augmented understanding of the self, aging parents and spouses, chronically underestimating the decency of which most people are capable--and who are forced to yield their secrets as others' unanswered questions become too much to bear. What's more, Glass's characters actually behave like adults, aware as they are that no two people want the same things or see the world the same way because every individual is a composite of their unique experiences and places, as well as the private details that add further duality to their personalities. The maturity with which Glass graces her characters allows for their adult dilemmas to be addressed in an adult manner, fostering an effective contrast between the teenage urgency and freedom that emanates from the flashbacks to Daphne's fateful summer at the music camp where Kit was conceived.

As Glass demonstrates her knack for believably and effectively linking people and events across time and connections, she twines them together to revelatory but largely positive effect: A book with a less optimistic regard for human nature wouldn't have allowed Kit to be so warmly welcomed by the grandparents and extended family he meets for the first time in his 40s, nor would his mother be so understanding (but forgivably reluctant) of Kit's need and right to discover his genealogical past for himself. But this isn't a novel that seeks external conflict to move its plot along so much as it demands that the personal growth of its characters develop the story. The recurring element of underestimating people only to be pleasantly surprised is evidence enough that this is a warm-hearted book, as is the way it embraces tragedy as one of the greatest unifiers among those touched by it.

Every good story needs some friction, though, and that which punctuates And the Dark Sacred Night is the novel-long query of conscious that weighs the benefits of lifting the veil of ignorance to gain a fuller understanding of one's self against its consequences, namely the risk that an escalating ripple effect could throw another's life in complete upheaval. But since there is no way to accurately compare what is with what could have been on account of the myriad unpredictable, unforeseeable variables of the roads not travelled, the limbo that comes from a lack of closure is deemed to be a far worse fate than the fleeting hell of slicing open old wounds and setting oneself for new ones. All anyone can do in an unpredictable world is take responsibility for their own happiness and find peace in knowing that any chance is taken with the best intentions.

And the Dark Sacred Night's many successes, unfortunately, do make its faltering missteps jarringly obvious. There is some heavy-handed drawing of parallels (a blizzard forces Kit to prolong the visit to his stepfather; later, when a hurricane similarly traps a house full of newly acquainted connections that share Kit's father as their common bond, it's a bit obvious that storms signal momentous occasions, diminishing the shock of the tragedy the latter sets up) and somewhat laboriously emphasized meanings, as if Glass doesn't always trust her audience to follow her implications. But such things are mostly innocuous grievances, as Glass deftly navigates her way through the most important instances of foreshadowing and symbols.

As a whole, Glass's newest novel is a largely successful one that, like its characters, is a bit uneven and imperfect but is buoyed by hopeful optimism that certainly deserves kudos for avoiding the kind of pat sentiment that is all too tempting to deploy when matters of the heart float so close to the surface.
Posted by Madeleine at 1:58 PM