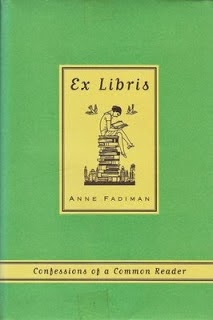 If you'll excuse what I know has to sound like a weak attempt at an obvious pun, I find that books are easier to read than people. I summon far less effort to read a page than a face, a chapter than mixed body language: Even the subtext and allusions and metaphors are all naught but new takes on old tricks, and the most elusive hidden messages are often buried no deeper than a careful reexamination of text laid bare with a willingness most people eschew in the name of self-preservation and tactful modesty. Besides, I'm far (far, far, faaaar) more apt to dislike a person than a book, so why not be better acquainted with the entity that's more likely to strike me as pleasing?

Having encountered hundreds of agreeable books by now, I can tell when one is poised to bound across the threshold between casual acquaintance and trusted friend. Because no two books, in a rare display of commonality with us moodier mortals, share the same personality, the one variable is when the deepening of our relationship will become apparent -- will we know by the time the last word hits us like a too-soon au revoir or will we realize that our meeting was fated for roaring success before I've even turned the first page?

Ex Libris and I were destined for each other. I knew this to be an undeniable truth simply from a mutual friend's appropriately glowing review that gave rise to the heartening pang reserved for the flash of recognition in spotting a kindred spirit from a distance that may be easily conquered but lengthened intolerably by the inconvenient fact that we'd not been properly introduced yet. Like a friend insisting that I ought to meet this person they just know with whom I'll enjoy an easy rapport, I sought the aforementioned book's companionship immediately, knowing it would be one of those rare times reality and fantasy sung in pitch-perfect harmony. Anne Fadiman's collection of essays culled from a lifetime of bibliomania and I, in truth, needed no introduction once our eyes locked in a Barnes & Noble: We knew that we were about the enjoy the rare bliss of a fast friendship and flowing conversation buoyed by quiet but doggedly personality-defining quirks.

Forgoing the polite formalities of aimless small talk that I've never had any use for, we quickly discovered our kinship by way of unabashed conversation girded with the intimate admissions that are usually divulged to the friends whose loyalty was built on years of shared experiences: Ours was a love at first sight that is usually only relegated to the fictions we both treasure as though they are the pillars upon which our own personal histories rest (and, really, they decidedly do).

We found instantaneous common ground by confiding early on that we both regarded it as a monumental moment, indeed -- with an eye cast far more optimistically toward the future than a mere marriage proposal, infinitely more demonstrative of a trust we'd only felt for one person that we proclaimed it before a roomful of witnesses, embracing a humbling but welcome vulnerability light years beyond that first appearance of the two-backed beast -- when we allowed the person we've vowed to love and support until both of our bodies have expired to combine their personal libraries with our own lovingly tended but fiercely guarded treasure trove of tomes, that to allow such a commingling of the closest we'll ever come to an outward manifestation of our personalities' truest forms with another's is the very definition of the hard-won but popularly cliched and carelessly bandied-about designation of "soulmate."

As we freely offered each other the pieces of ourselves we usually sheltered beneath layers of protective trivia and adopted personae, sitting forehead-to-forehead as hours melted away like minutes during our sometimes tittering, sometimes somber but always generously peppered with earnest, animated outbursts of "I know exactly what you mean! I thought I was the only one!" conversation, we unearthed more and more gold nuggets of shared insights and experiences: rampant logophilia; an incorrigible but well-intentioned need to proofread everything made of words; the ongoing struggle against but secret thrill of one's living space looking less like a home and more like a used bookstore (which, really, is the only other place we're truly ourselves, anyway); the pleasure of carnally loving a book to the extent that its spine is permanently bent and its marginalia is such an imprint of the self that the very idea of letting someone else borrow it requires tapping into some inner peace to get over the anxiety akin to letting someone rifle through your diary with dirty fingers and malicious intent; the unavoidable comparison between a decadent meal and a five-course book and the primitive, multi-sensory satiation that accompany both.

Alas, all good things must come to an end and, as we blinked with disbelief into the light of a new day, we realized that our electrifying and animated first meeting was rushing toward its inevitable denouement. And I realized that the jealousies I'd brushed aside in the eager pursuit of getting to know this marvelous new ally with whom I shared multitudinous proclivities and compulsions were now a spreading stain that unfairly marred our enchanted first encounter, which is a personal failing that should say terrible things about me and should not, at all, be held against this exuberant and eloquent little book (but is what keeps it from being a five-star read for purely selfish reasons -- I assume, with the heavy-handed clarity of hindsight, that Ex Libris is dressed in green to warn me how deeply I'd envy anyone whose childhood was a warmly nurturing word nerd's dream and a booklover's haven). I know we'll meet again and, that when we do, my pettiness will have long ago been overshadowed by fond memories of a soul-baring heart-to-heart that is worth the dozens of instances of painfully insipid chatter I suffered through to find it.
Posted by Madeleine at 11:00 AM