(This review was originally written for and posted at the Chicago Center for Literature and Photography's site. The publisher very generously provided me with a copy of this novel.) 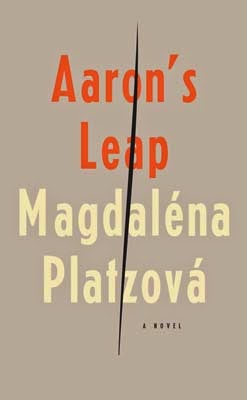 Magdaléna Platzová's Aaron's Leap is a powerful, sobering meditation on both the human condition and the nurturing of the artistic soul that closes the distance between far-flung eras, absent friends, and seemingly unrelated histories of people and places alike--all of which demonstrate a unifying power akin to a ripple effect in time.

The narrative bounds across decades to explore a modern-day Israeli film crew's efforts to produce a documentary about the early- to mid-1900s life and art of Berta Altmann. Berta gets her own voice and story throughout the book, revealing intimate details about her that no retrospective examination of the conflicted woman could ever hope to replicate--a limitation that Berta's friend and fellow artist, Krystýna Hládková, is keenly aware of, coaxing her toward filmed interviews in the hopes of adding crucial dimension to what she sees as a detachedly historical film. Krystýna's granddaughter Milena tags along as a translator and soon finds herself romantically though confusingly entangled with the crew's cameraman, the titular Aaron, and the two add their own interconnected threads to the book's tapestry of inevitable connections.

Aaron's Leap is not just one character's story but it is bound by one idea: the necessity of art. The crucial role art plays in society and the artists' need to create form the backbone of the novel, with the characters' stories serving the central thesis to varying degrees. Aaron throws himself into his work, almost talking himself out of his feelings for Milena by convincing himself that she would be a distraction from the career to which he's devoted himself; Berta practically tortures herself to produce art that satisfies her, railing against her own impulses to fit a mold that isn't true to her own avenue of expression; Krystýna, primarily appearing as an elderly woman whose final days are upon her, destroys some of the uglier vestiges of her past and throws most of her efforts into detailing the Berta she knew in the hopes of leaving behind images both of herself that her son can peacefully live with after she's gone and of the Berta she knew and loved that would otherwise die with her.

The conflict between artists' utterly devoted, almost childlike tunnel-visioned regard for the work driving them and the cold imperatives of adult responsibility emerges as a recurring theme, emphasizing the frustrations that arise from trying to strike a realistic balance between the two. Berta is the best encapsulation of this, from witnessing a professor's descent into seeming madness in order to live in unbridled servitude to his art to trying to find her own harmonious allocations of energy. She responds to an interrogation regarding the openly communist ideals she has cultivated by explaining "We don't want to destroy... We want everyone to have enough food and heat, so they don't have to choose between working for money and working for the soul" and crying out in her diary entries with existential crises like "Must one really work and scrape by only for oneself to be able to create something? Must one be self-centered?"

The seemingly self-serving nature of the artist is a frequent concern for Berta, who is routinely described as a warm, magnetic and wholly selfless woman. A therapist suggests that growing up without a mother and with a father who couldn't give her the attention she needs left the adult Berta craving love and unwilling to impose upon others, which ultimately reconciles her artistic confidence with the ostensibly incompatible self-doubt plaguing her personal life. Berta is so worried that she doesn't give enough of herself to others and saves her best parts for her art that it's not until two days before she and her husband are sent to the Terezín concentration camp that she finally realizes she has sabotaged herself, confessing that "the balance of almost forty-two years" is that she has "accomplished nothing as an artist." Neither Berta nor anyone else directly pose the question, but it is this slap of clarity that asks whether it is more selfish to live for one's art or to be so devoted to others in the finite present that it compromises one's intended legacy as a canonical powerhouse, inadvertently diminishing the enjoyment of others in the far more expansive future. When Krystýna correctly observes that Berta was only able to give herself to others through her talents in Terezín by offering art lessons to the children imprisoned with her--and, therefore, giving them some shred of normalcy during a hellish obliteration of the childlike innocence she understood so well--it is one of the book's most piercing, tragic revelations about an otherwise strong woman whose unearned sense of guilty obligation to others was her undoing.

Platzová expertly illustrates the connectivity of the past, present and future, as well as the influences such chains of events impose on the widening spiral of time. It is not only Berta's living past and current memory that unite strangers and places but also the shifting times that she witnessed that drive this point home with a poignancy. The artists comprising the company she kept as a young woman regard themselves as midwives ushering in a new era on the ashes of the old in an "attempt to remold human life and its industrially produced elements into an artistic work." There can be no new worlds created without nurturing a dissatisfaction with the old, and a willingness to sit by dispassionately in uncertain times of flux between the two is to suffer a living death.

Likewise, stagnation arises from sidestepping opportunity one too many times, as the chances to become the person that one's talent mandate they should be are not a limitless resource. While it took Berta nearly her entire life to keep her short-term needs from obscuring her long-term goals, there is a chance that Aaron will not make the same mistake and, in fact, take the leap that will lead him to the sublime fulfillment that life is waiting for him to embrace.
Posted by Madeleine at 7:17 AM