A Whole New Ballgame is the story of a 20-something woman who finds comfort and solace in baseball as her carefully ordered world starts to unravel. 26-year-old Laurie Nicholson thinks she’s beginning to sort things out when it comes to life, work, and love. When a sudden declaration from an on-again, off-again boyfriend inspires her to take a risk, only to meet with crushing heartbreak instead, Laurie finds herself searching for refuge.

A chance encounter with Eric Morris and Peter Ellis, two friends spending their summer visiting every ballpark in America, offers Laurie an unexpected way to salve her wounds. Despite growing up in Boston surrounded by Red Sox fans, she wasn’t a fan of the game–until Eric and Peter’s enthusiasm turn that around and she falls in love...with baseball. 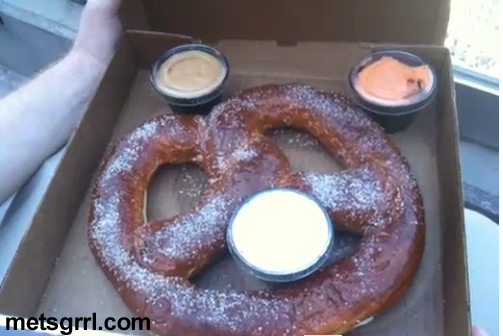 While many diehard baseball fans dislike the recent trend away of stadium food moving away from the standard hot dogs, peanuts, and Cracker Jack, I’m a huge fan of the unique items that many of the parks are becoming known for, and it’s definitely added to the attraction of attending road games.

I dreamed of the garlic fries at AT&T Park in San Francisco for years before I got there, but actually enjoyed the Cha-Cha Bowl (a kind of Caribbean version of bibimbop) a lot more. Dodger Dogs were a huge let-down, while the barbeque baked potato at Minute Maid Park in Houston remains my #1 most underrated, unknown ballpark food.

It’s become a point of pride for both the fans and the teams to show off their food specialties as they expand, feature more local vendors, and add options to the usual hot dogs. It definitely adds to the experience and localizes the ballpark further.

The Wild Rice Soup at Target Field: I know, soup at a ballpark? But it is the perfect thing to take the chill off the air, and has wild rice indigenous to the region. Plus, it’s a nice change when you’ve been eating brats and food-on-a-stick and other cheese-covered Minnesota specialties.

The Lobel’s Steak Sandwich at Yankee Stadium: I am loathe to write anything positive that involves the Yankees, but the steak sandwich is pretty amazing. The line will be long, but all that stand serves is the steak sandwich and drinks, so it moves quickly. Buy one, find a plastic knife (or sneak in a spork, like we do) and split it in half, because it is entirely too much food for one person. 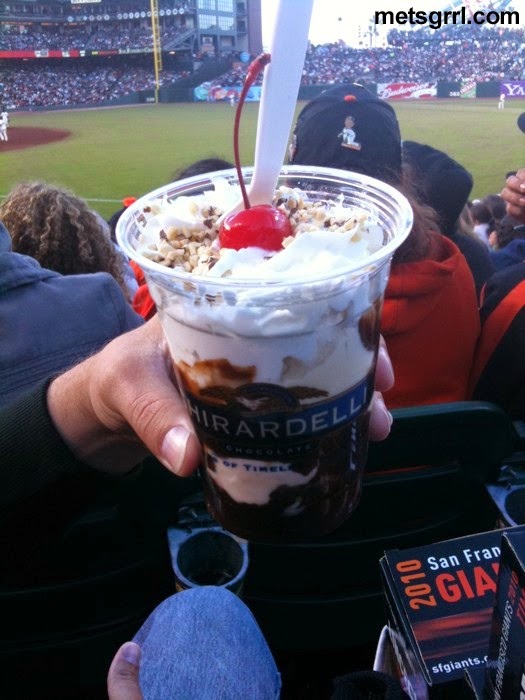 Honorable Mention: The Giants have in-seat service for Ghirardelli hot fudge sundaes as well as hot chocolate on a seasonal basis.

At Citi Field, my home park, the line for Danny Meyer’s Shake Shack stretches like that of a Disneyland ride, while right across the concourse El Verano Taqueria has zero line. Get the triple taco combo. Or, if you want to stay old-school, go for the Mama’s Special from Mama’s of Corona, a long-standing fan favorite and holdover from the Mets’ Shea Stadium days. These are the two recommendations I make to every out-of-town fan coming to the park, or any beat writer coming in on assignment.

Eric and Peter would, of course, know every food they should eat at every 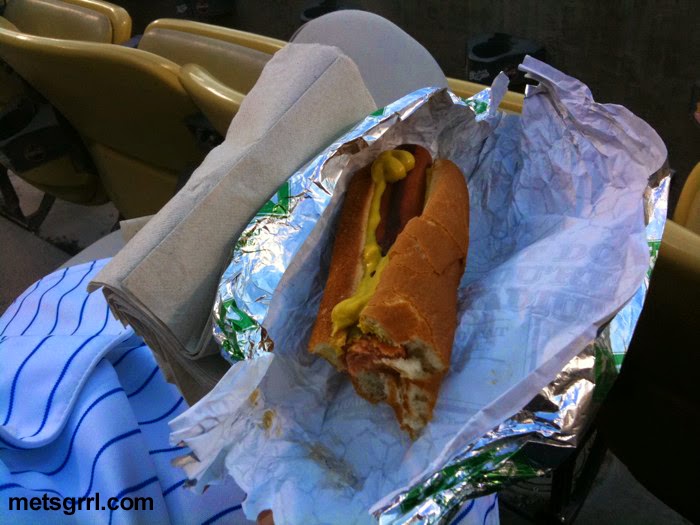 ballpark they visited. It would be (and was) part of the intel Eric compiled for every ballpark (as he, quite rightly, warns Laurie away from trying to eat anything at Wrigley Field). All of the ballparks have food maps and the teams now have food preview days at the start of each season to showcase the new dishes and new vendors in the park that season. Plus, with the advent of the baseball blog community in the mid-’00s, any intelligent baseball fan had a very easy direct connection to what was going on in just about any ballpark.

Caryn Rose is a Brooklyn-based writer and photographer who documents rock and roll, baseball and urban life. From 2006-2011, she authored the groundbreaking blog metsgrrl.com, covering baseball and the New York Mets. A Whole New Ballgame is her second novel. You can find her at jukeboxgraduate.com and on Twitter at @carynrose and at @metsgrrl during the season. Purchase A Whole New Ballgame here.
Posted by Madeleine at 6:27 AM